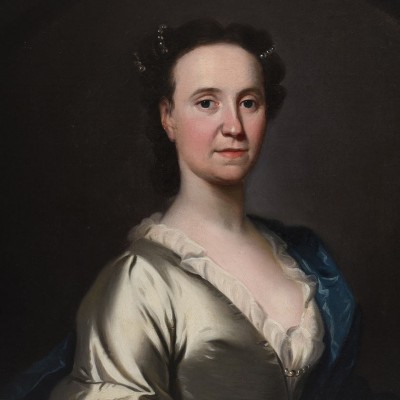 Anne Morland was the second daughter of Jacob Morland of Capplethwaite, Cumbria. Her father was a Justice of the Peace and a well known portrait of Jacob Morland with his dog, painted by George Romney in 1763, hangs in the Tate Gallery, London. Ann married William Matson of Titup Hall, Barrow in Furness, Lancashire. They had two children, Margaret and Ann – the latter married Tomas Morland (to whom we think she was related). They lived at Court Lodge, Lamberhurst, Kent.

Joseph Highmore was educated at The Merchant Taylors School, London. He began his career as a lawyer but abandoned this to study art at Sir Godfrey Kneller’s Academy. Highmore established a very successful practice as a portrait painted in 1715 and was described by George Vertue as being ‘distinguished in the first class of those who make the best figure’. His works are represented at The National Portrait Gallery and The Tate Gallery, London